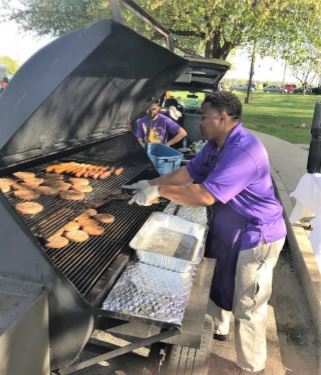 RCD has hosted several successful Open Streets events in Dover since 2018. These events bring together resources and activities to give residents a reason to celebrate and spend time together outside enjoying healthy activities.

Open Streets are evidence‐based programs that temporarily open streets to people by closing them to cars. By doing this, the streets become places where people of all ages, abilities and backgrounds can come out and improve their health by participating in recreation and leisure time activities.

In April, RCD held an Open Streets event in Simon Circle in Dover. It was fun for all ages with delicious food, Zumba, biking, yoga, exercising, dancing, basketball, volleyball, carnival games and more!

Noël Sincere Duckworth, Coordinator for University of Delaware Partnership for Healthy Communities and Community Engagement Initiative, said Open Streets is a positive impact on the health of the community. “Evidence suggests that return Open Streets attendees are more active, and that while at the event, the majority engage in 30–150 minutes of activity,” she said.

A DJ entertained the crowd throughout the event. Guides hosted Tree Walks where participants learned about various trees in the park. There was also a cardboard box boat competition, free food and games compliments of RCD.

“Silver Lake is a gem in our community,” Dover Mayor Robin Christiansen said. “It took a little bit of a hit this year by some people besmirching its reputation, and we’re just doing everything we can to have as many supported events out there that will bring people down to Silver Lake where they will see that it’s safe, that it’s a great resource in our city and it’s one of the reasons that a lot of people come to the City of Dover.”

Adopted in 2014, Restoring Central Dover is a Comprehensive Neighborhood Revitalization Plan in motion. The Plan and its implementation is led by NCALL and a Steering Committee. The Plan represents our community’s vision for restoring the vitality of Central Dover and lists recommendations for implementation over the next 10 years.

NCALL is an IRS-designated 501(c)(3) nonprofit organization based in Dover, Delaware, that specializes in affordable housing development, education and lending.